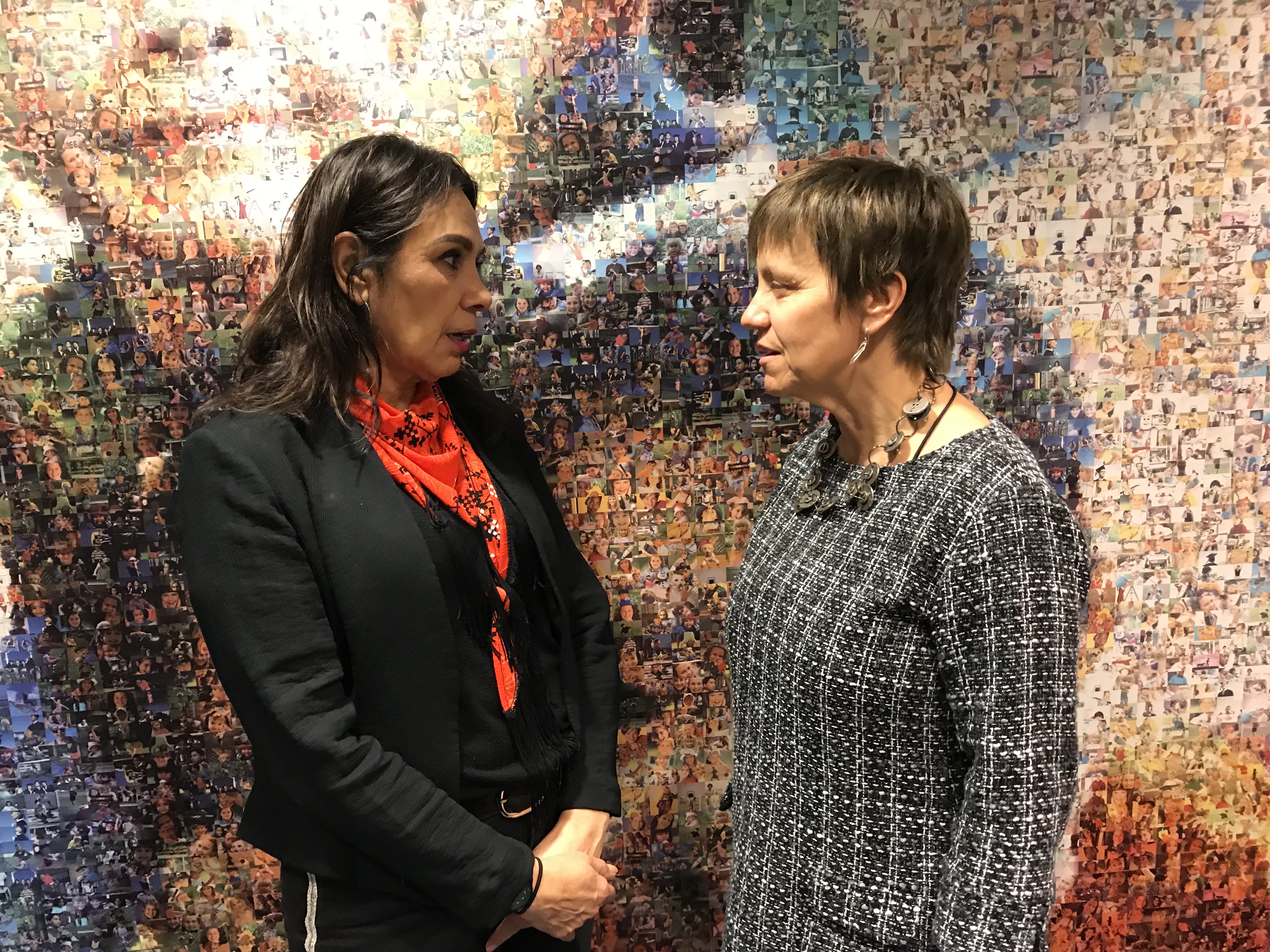 The federal minister of Indigenous Services, Jane Philpott, called for an emergency summit to be held last month to address the current situation in Indigenous child welfare, which she has likened the horrors of residential schools.

Days after the release of the plan, the Canadian Human Rights Tribunal issued a fourth non-compliance order stemming from their 2016 ruling that the federal government’s First Nations child welfare system is discriminatory. The tribunal ordered the government to start paying the true costs of child and family services agencies that work on reserves, retroactively from January 2016.

In response, Minister Philpott announced the government would comply with the order, and that those agencies can start operating under the assumption that costs of their programming will be covered by the government. The details of the funding are expected in the upcoming federal budget.

Karen Hill, Director of Indigenous Services at OACAS, and Mary Ballantyne, CEO of OACAS, attended the emergency summit. The following are some of their thoughts and reflections on the historic meeting.

Q. Tell us a bit about the importance of this meeting.

We were honoured to be invited. It was federal and national in scope. It brought together Indigenous leadership across Canada to begin the discussion around the child welfare crisis that most of our communities are experiencing.

I felt the summit was signaling a shift across this country, in the relationship between Indigenous people and the Federal government. Signaling a different and more equal partnership with Indigenous leadership in child welfare.

I think it was very significant that the summit took place almost two years to the day from the Human Rights Tribunal’s ruling. The whole country needs to look at this issue, and I think the other provinces are seeing the same issues and the same concerns as we are here in Ontario. We didn’t hear a lot about what other provinces were doing, but what we did hear from Indigenous leadership was a pretty consistent story. We heard about the difficulties these communities are having, about overrepresentation in child welfare, about needing to find a path forward with jurisdiction.

It was important that we were invited and that we attended, given the commitments we’ve made to Indigenous communities towards Reconciliation. We have to demonstrate that we’re open to listening and learning and being true collaborators to change the face of child welfare when it comes to Indigenous kids and families.

Q. As you mentioned, the national scope of this meeting was significant. Did you note anything in particular about those invited to participate?

What was significant to me was that they included Inuit and Métis, that they had political representation at the meeting. They made it clear they also want what Indigenous people have wanted for a long time.

Q. Was it a productive meeting?

Hopefully it was. It did bring the whole nation together, all the key people around child welfare, and put the issues on the table. But we’re going to have to see. Because 50 years ago these same issues were on the table. And two years ago the government was ordered to do something about it and we haven’t seen that kind of change yet.

I think much of what we heard at the summit can lead to productive things. Across the board from the Indigenous leadership there was a call for a bigger approach to child welfare—one that included prevention, capacity building in community development, service delivery, and that respects the authority and autonomy of Indigenous communities to make decisions about their children and families. A holistic approach that focuses on community development and healing and the autonomy and authority of communities to take care of their own children.

Absolutely. The idea of prevention was really prominent at the meeting. Meaning child welfare agencies working with families so that they can look after their own children. It was clear that they wanted all governments and all relevant organizations to be focused on doing the work of child welfare in that way. The importance of incorporating a trauma informed treatment response was also a theme throughout the two days. Indigenous people and communities need the opportunity to heal from the trauma perpetuated against them over the past many decades so that they are better able to take back the care of their children and control of child welfare work.

Q. When you look at child welfare’s relationship with Indigenous communities across the provinces, where does Ontario stand?

The issues are very similar across Canada. The stories we heard at the meeting were along the same lines of the stories we heard at the Reconciliation event. Although the proportions of Indigenous children in care in Ontario might be less than some other provinces—something that is largely due to differences in Indigenous and non-Indigenous populations—I don’t think we can say Indigenous children and families are necessarily being better served here than other provinces.

That being said, we need to keep moving. We need to be part of the change. While it is not our job to be designing the future of Indigenous child welfare, it is our job to do better for the Indigenous children and families we currently serve. The work we’ve identified through our Reconciliation commitments show us our next steps. In Ontario—with our unique structure of local agencies—we really do have it within our own power to do things differently for those we currently serve by working much more closely with First Nation and Indigenous service providers. At the same time, we need to support Indigenous Communities to take back the mandate of child welfare.

Exactly, we can be more responsive to community need and community context. And Ontario agencies are demonstrating their willingness to do just that for Indigenous communities. It’s a bumpy path, but they are on it, and that’s a good thing. No one is giving up.

Q. How do you view the funding announcement that followed the summit?

Indigenous communities and Indigenous child welfare agencies have been so seriously underfunded for decades, they’ve only been able to deliver the most basic crisis intervention service. They’ve only been able to scratch the surface of what the true need is for families. To support them to recover from the intergenerational trauma caused by the residential schools and the 60s Scoop, and more generally the forced removal of people to land bases and lifestyles that were completely foreign to them culturally. While we can be optimistic about the funding, we also need to scrutinize carefully what the true need is. We need a comprehensive process where you evaluate and provide feedback, and are prepared to be bigger in the offer of support as you need to be.

Hopefully, the funding announcement is a signal that the federal government is really ready to step up. But it will need to go beyond just funding for the day-to-day operations of Indigenous child welfare agencies. It will also have to address the infrastructure of the Indigenous communities, the health issues in the communities, and the trauma and healing that needs to happen. And it’s not just dollars, it’s also supports in resources and infrastructure that go beyond just child welfare to include schools, health facilities, and treatment opportunities, to name just a few.

Q. What are the next steps for moving forward with Reconciliation here in Ontario?

Indigenous child welfare is changing, and changing at a rapid pace. It continues to move towards Indigenous communities taking more and more ownership back in child welfare, which we strongly support. It’s not our job to be designing what the future is going to look like.

But as for the Indigenous children still being served in non-Indigenous agencies, we need to continue to do better. That really comes right back to our Reconciliation commitments. The things that need to be changed, day in, day out, for the kids we are working with now are in those commitments.

While we want to be optimistic, we need to be mindful that this is not a new concern or issue. It’s been on-going for even longer than 50 years. The onus is really on us as individual children’s aid societies to pick up and do what we can do. We can’t stand by and wait on the government to fix it. We have to take concrete action and do what we can.