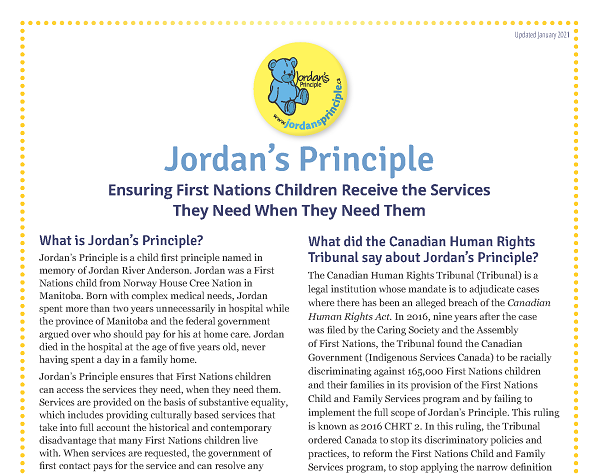 “Jordan River Anderson was a First Nations child from Norway Cree House Nation in Manitoba. Born in 1999 with complex medical needs that could not be treated on-reserve, he spent more than two years in a hospital in Winnipeg before doctors agreed that he could leave the hospital to be cared for in a family home. However, because of jurisdictional disputes within and between the federal and provincial governments over who would pay costs for in-home care, Jordan spent over two more years in hospital unnecessarily before he tragically died in 2005. He was 5 years old and had never spent a day in a family home.” 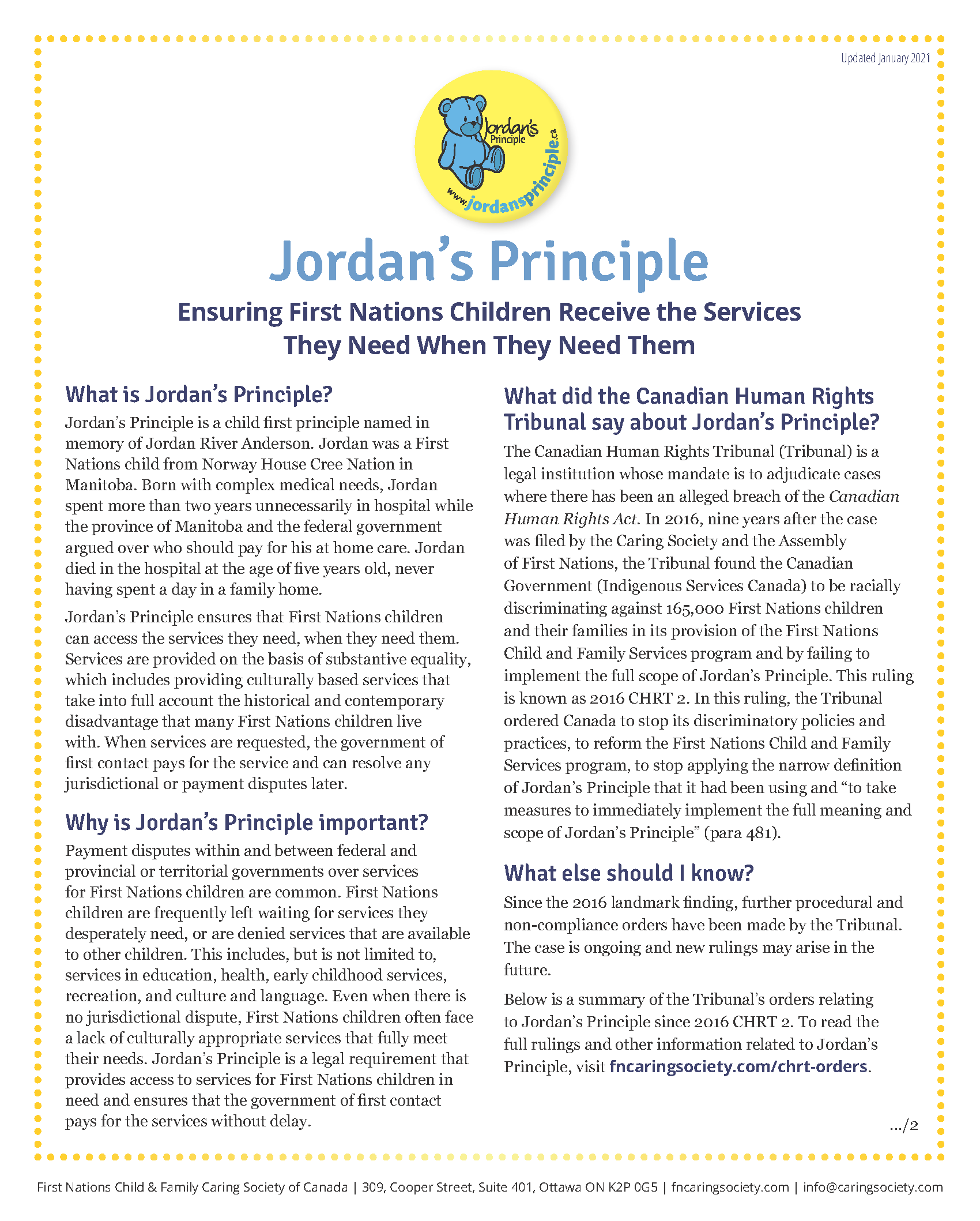 MYTH: The Principle applies to cases where there is a dispute over which level of government will pay for a child’s services.

FACT: Jordan’s Principle is about supporting substantive equality for First Nations children when accessing services such as education, mental health, medical equipment, speech therapy and more. According to the Canadian Human Rights Tribunal June 2017 summary of orders, “A jurisdictional dispute between departments or between governments is not a necessary requirement for the application of Jordan’s Principle.”

Jordan’s Principle seeks to ensure that First Nations children can access all public services when they need them, and that those services be culturally based and take into full account the historical disadvantages many First Nations children face. It also seeks to alleviate the administrative burden on children accessing services, and eliminate service denials, delays and disruptions.

MYTH: Only a family can apply to have the costs of their child’s services covered under Jordan’s Principle.

FACT: A request for a child or children in the same family or with the same guardian can be submitted by:

A community or service provider can make a request on behalf of a group of children from multiple families or guardians.

MYTH: Only services required to achieve the same standard of care non-Indigenous children receive will be covered under Jordan’s Principle.

FACT: The Jordan’s Principle fund is not a resource to fund baseline, normative care services for First Nation children. Jordan’s Principle is focused achieving substantive equality, which is not the same as equal treatment. Substantive equality is a human rights concept that weighs factors like discrimination, marginalization, and unequal distribution of resources when considering policies and evaluating outcomes.

According to the Canadian Human Rights Tribunal June 2017 summary of orders regarding Jordan’s principle: “In cases when a government service, including a service assessment, is not necessarily available to all other children, or is beyond the normative standard of care, the government of first contact will still evaluate the needs of the child to determine if the provision of services should be provided to ensure substantive equality, culturally appropriate services, and to safeguard the best interest of the child.”

This means that additional services that are required to achieve substantive equality for a First Nations child must be funded under Jordan’s Principle. The Government of Canada describes it as “…giving extra help when it is needed so First Nation children have an equal chance to thrive.”

To learn more about Jordan’s Principle: