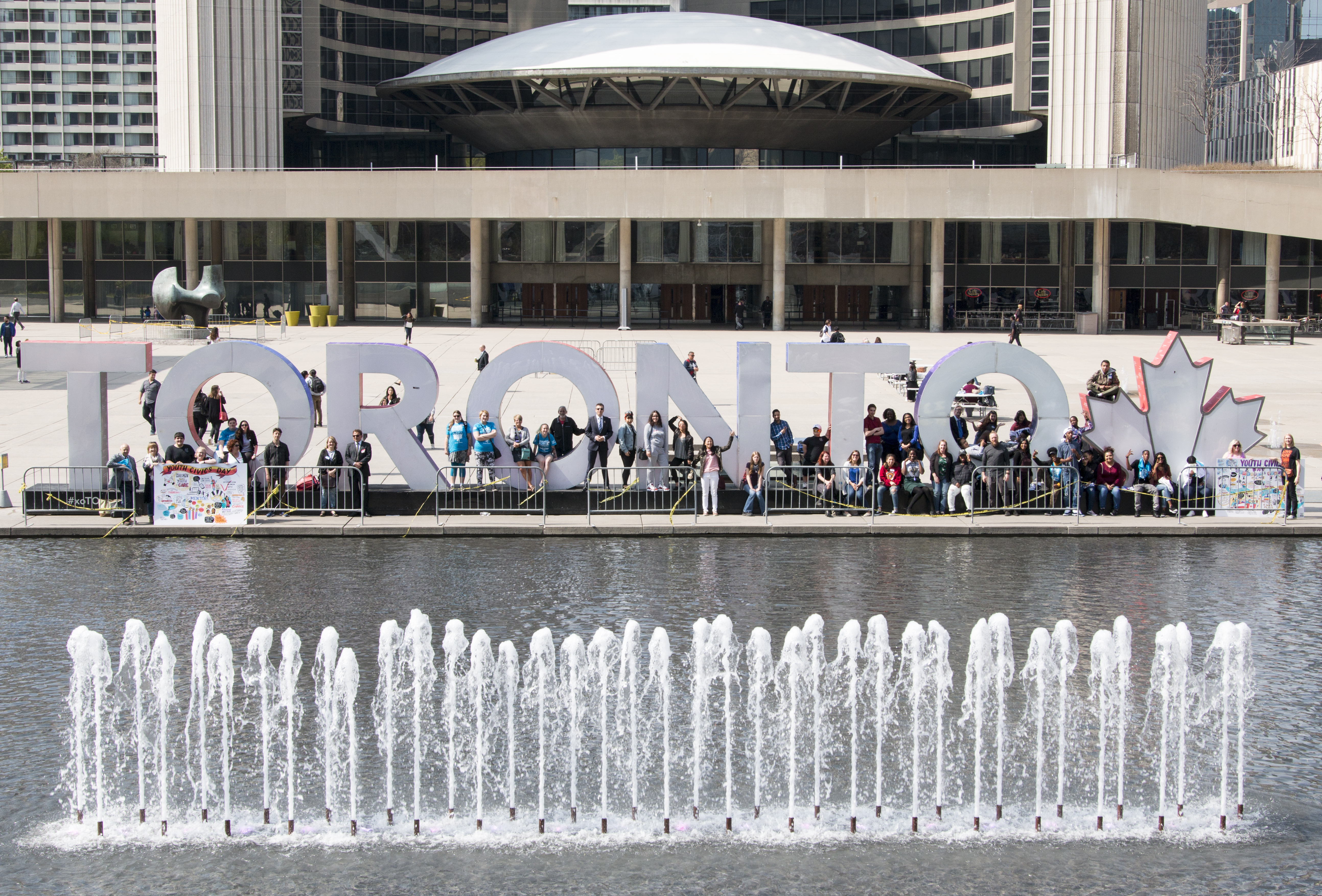 On the fifth anniversary of Children and Youth in Care Day in Ontario, over one hundred youth and former youth in care and their workers travelled to Toronto City Hall to attend a “Youth Civics Day.” OACAS partnered with the Ontario Child Advocate to host the event, which focused on promoting youth engagement in public life.

“Our aim was to focus on fun, interactive activities that raised awareness about the power of youth engagement in their communities and the power of voting, especially given the upcoming provincial election,” says Taina Mayberry, Youth Programs Coordinator at OACAS and the event co-organizer. “We held the event at the Toronto City Hall Council Chamber instead of the Provincial Legislature this year, knowing that the space had less visitor restrictions and would allow youth to participate in a more hands-on interactive way. We encouraged them to think in advance about the important topics they wanted to advocate for during the day.”

The theme for Youth Civics Day was #standupforwhat?! Youth were encouraged to wear t-shirts with graphics that reflected the social issues they cared about, which would not have been possible at the Provincial Legislature.

Over one hundred youth and former youth in care and their workers travelled to Toronto City Hall to attend this year’s “Youth Civics Day.”

The upcoming Ontario provincial election provided an important focus for the day with the goal of raising awareness among the youth about their right to vote and how to go about voting. In his presentation Greg Essensa, Chief Electoral Officer of Ontario, showed how voter turnout has steadily declined over the decades. “If you vote at the same rate as your parents and grandparents you will definitely be able to make change,” he encouraged participants. Youth were given an opportunity to participate in a “Vote Pop Up” mock voting exercise, and through the vote identified affordable housing as the social issue they considered to be the most pressing. Youth were also able to register for the upcoming election at an Elections Ontario table. The Ontario Liberal Party, the Ontario PC Party, and the Ontario NDP party also had tables where they provided party material to the youth.

Kevin Modeste and Velma Morgan from Operation Black Vote Canada, an organization dedicated to electing more black politicians, encouraged youth to believe that there was true opportunity to make a difference in politics. “What do you think of when I say the word “politics”?” Modeste asked. Youth answered, “boring stuff”, “bunch of guys in suits”, and “people not listening to what our opinions actually are.” In response Modeste said, “Keep an open mind on how you can make a difference in your space,” and gave tangible tips on how to reach out to decision makers.

Anayah Phares, a former youth in care and head of Cheers Mentorship program, talked to youth about the challenges of transitioning out of care, and the need to look for support, such as the kind her program provides. “Don’t fool yourself,” she told youth. “You can’t do this alone.”

Marek Michalak, the Ombudsman for Children in Poland, and visiting guest of Ontario Child Advocate, Irwin Elman, noted the historic change in youth engagement that this gathering represented. “Even thirty years ago, the participation of youth in civic affairs was unheard of,” Marek Michalak told the youth sitting at the desks reserved for Toronto councillors during monthly city meetings. “The right to free expression is the most important right, but it has not always been so available. And we are still learning how to promote the free expression of youth, because we adults were brought up in a world where we were never listened to as youth, and where the adult was always right.”

Youth use their voice during Youth Civics Day

Youth participants quickly made it clear that they were keenly aware of this historical opportunity and their desire to take advantage of it. When the scheduled question and answer with Ontario Child Advocate ran out of time, many youth argued that the session should be extended. “This is supposed to be our day but people just keep talking at us,” said Ashley, a former youth in care. “Nobody is listening to us, and we have problems to tell you about, but it feels like you are shutting us down.”

In response, event organizers adjusted the agenda so youth could have more time to speak about the advocacy issues they wanted to raise as a result of their experience in the child welfare system.  Some of the concerns raised included:

Youth also questioned whether using their voice in public life was enough. “I have no security that change is actually being made after I speak up,“ Pauline told the Ontario Child Advocate. “How can we know that once we say something it will actually lead to change?”

Irwin Ellman reminded the youth of the significant impact their input has already had on the child welfare system. “You went to the legislature with 200 suggested amendments to the new Child, Youth and Family Services Act, and it’s now the law that every decision for every child and youth must include their meaningful participation. It’s the law and it wouldn’t have happened without your voice.”

Elman also reminded youth that the annual Youth in Care Day became provincial legislation because of youth recommendations during the Youth Leaving Care Hearings in 2012. “Today the entire province is thinking about you and cherishing you and asking how can we do better? And this day would not have happened if young people hadn’t gone to the legislature and said, “We can do better Ontario!”